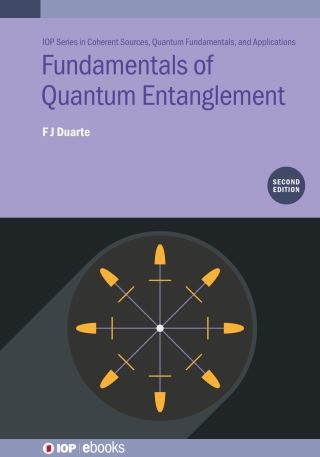 Quantum Entanglement has rapidly become a subject of great interest in academia, industry, and government research institutions. This book builds on the first edition of Fundamentals of Quantum Entanglement to provide a transparent and more insightful introduction for graduate students, scientists, and engineers. It is also a highly useful education tool for those practitioners that were not aware of the physical origin of quantum entanglement: the Dirac-Wheeler-Pryce-Ward physics. The new edition includes an expansion on topics such as quantum entropy and quantum time. The book provides a direct, practical, and transparent introduction to the principles and physics of quantum entanglement. It does so whilst utilizing an interferometric approach based on Dirac-Feynman superposition probability amplitudes.

F J Duarte: F J Duarte is a laser and quantum physicist based in the USA since the 1980s. He has extensive experience in the academic, industrial and defense sectors. He is an editor/author of 15 laser and quantum optics books and sole author of three books (Tunable Laser Optics, Quantum Optics for Engineers, and Fundamentals of Quantum Entanglement). He has made key original contributions to the fields of narrow-linewidth tunable laser oscillators, nanoparticle solid-state laser materials, coherent emission from electrically-pumped organic semiconductors, and laser interferometry. He is also the author of the multiple-prism grating dispersion theory applicable to tunable lasers, laser pulse compression, and coherent microscopy. His contributions have been applied to numerous scientific fields from astronomy to nanophotonics. In 1987 he was elected Fellow of the Australian Institute of Physics, and in 1993 he was elected Fellow of the Optical Society of America. Dr Duarte has been awarded the Engineering Excellence Award and the David Richardson Medal from the Optical Society (Optica).