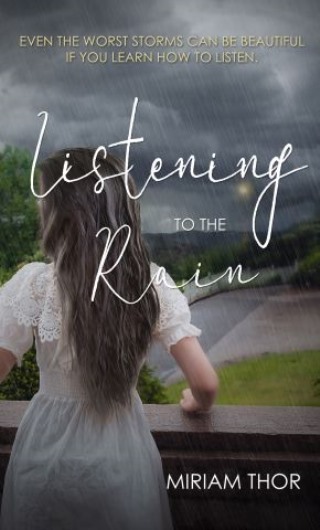 Listening to the Rain

During her freshman year of high school, Ally Griffin is determined to find her thing, a talent that will let her gain praise and recognition. Her cousins, Billy and James, have found theirs in sports and music, but Ally has yet to discover something that will make people cheer just for her.

At her best friend's suggestion, Ally tries ballet. When that doesn't turn out the way she hopes, she signs up to sing in the school talent show. Thanks to support from James, Ally's performance goes well, and she thinks she has found her thing at last.

But when James gets into an accident, Ally's whole world is turned upside down. As she tries to be there for her cousin, Ally wrestles with why God allows bad things to happen and whether she should keep doing her thing at all.

Miriam Thor: Miriam Thor grew up in Louisiana. After high school, she attended Gardner-Webb University in North Carolina where she majored in American Sign Language and elementary education. Currently, she lives in Alabama with her husband and cats. She is employed as a sign language interpreter at an elementary school.Miriam discovered her love of writing in second grade and has been doing it ever since.