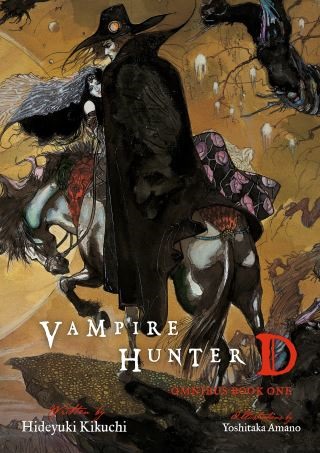 It is 12,090 A.D., thousands of years since the human race nearly destroyed itself in a nuclear war--a folly foreseen by those who waited to emerge out of the underground...not from shelters, but from crypts!

The aristocratic vampire lords known as the Nobles inherited our world, and with dark science and immortal patience made real the things that mortals had merely dreamed, whether voyaging to the distant stars, or conjuring monsters to roam the Earth.

Yet the grand civilization of the Nobles has grown decadent, and as the terrorized remnants of humanity at last found the strength to rebel, their undying lords have been pushed back to the Frontier--the violent borderlands where humans still remain the prey of vampires, who for all their knowledge and power have never lost their obsession with our living flesh, blood...and souls!

In this bizarre and deadly far future the most dangerous thing of all is not a vampire, but the one who hunts them--the one who is half them--a dhampir, the unearthly beautiful wanderer known as D. The Vampire Hunter D Omnibus collects the first three novels in author Hideyuki Kikuchi's adventure horror series: Vampire Hunter D, Raiser of Gales, and Demon Deathchase. Illustrated by Final Fantasy artist Yoshitaka Amano, this book is only the beginning of a legend!

Hideyuki Kikuchi: Hideyuki Kikuchi is a Japanese author famous for his horror novels. His most famous works include the Vampire Hunter D series, Darkside Blues, and Wicked City. He has been compared to both Stephen King and H. P. Lovecraft. Kikuchi was born in Chōshi, Japan, on September 25, 1949. He attended Aoyama Gakuin University and was trained as a writer by famed author Kazuo Koike. His first novel, Demon City Shinjuku, was published in 1982. Kikuchi became close friends with writer and director Yoshiaki Kawajiri during his adaption of Wicked City and the two have since collaborated on Vampire Hunter D: Bloodlust and the OVA of Demon City Shinjuku.