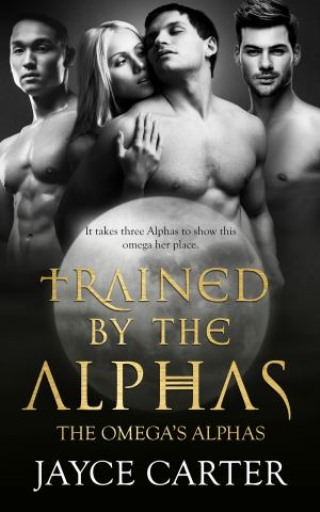 Trained by the Alphas

It takes three alphas to show this omega her place.

Alison has lived on the fringes of her own life, quick to help every omega who needs it but unwilling to risk any friendships or connections. Unfortunately, when Alison's friend falls prey to slavers, she has no choice but to dangle herself as bait in order to find her. Instead of the slavers she expects, though, she ends up caught by three alphas she wants nothing to do with.

Daniel, Kyle and Trent risk ruining an undercover case to save a drunken omega, but they're caught off-guard when the omega beats them up and escapes. The strange woman excites and intrigues them...and the only way to find the slavers before the stolen omegas are lost forever is for Alison to go undercover with them—as their slave.

When Alison plays the part of a willing, obedient slave and the alphas revel in her every submission to them, the line between reality and pretense blurs. As Alison and the alphas race to find the kidnapped omegas before it's too late, they'll have to face their own demons or risk losing everything at the hands of the very enemies they're chasing.

Jayce Carter: Jayce Carter lives in Southern California with her husband and two spawns. She originally wanted to take over the world but realized that would require wearing pants. This led her to choosing writing, a completely pants-free occupation. She has a fear of heights yet rock climbs for fun and enjoys making up excuses for not going out and socializing.