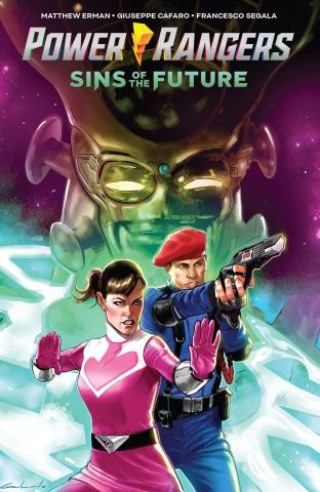 An all-new graphic novel set after the events of the hit Power Rangers: Time Force television series that features two of the most popular Rangers of all time, from Trey Moore (Mighty Morphin Power Rangers), Matthew Erman (Bonding) and Giuseppe Cafaro (Saban’s Power Rangers: Soul of The Dragon). Fan favorite Pink Time Force Ranger Jen Scotts and Red Time Force Ranger Wes Collins have a star-crossed romance divided by time, as Jen comes from the future and Wes from the present. But just as it looks as though they’ve found their happy ending, they receive a dire warning—their romance could disrupt the timeline and change the destiny of humanity! As they struggle with a terrible choice—their relationship or the fate of the world—the shocking identity of their accuser sets them on a collision path with an enemy they never expected. Can Jen and Wes survive the threats to their past, present and future? Or will their love be the end of all time as they know it?