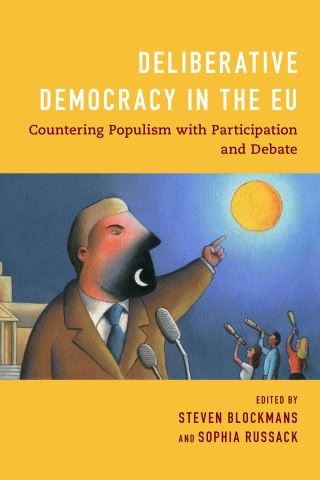 Deliberative Democracy in the EU

Countering Populism with Participation and Debate

Representative democracy remains the best available form of government – and the one preferred by most EU citizens, but satisfaction with how it plays out varies greatly across the continent. Among the perceived weaknesses are high levels of political corruption, low resilience to disinformation, and out-of-touch governing elites.

Yet there is some hope that direct channels for citizens to express their concerns and preferences, fact-based deliberation in representative bodies and robust mechanisms to hold governments to account can help save European democracy from the onslaught of populism.

This volume draws together proposals into a framework reflecting the four cumulative criteria used by modern political theorists to assess the health of a democracy: inclusion, choice, deliberation and impact. Its expert contributors offer pragmatic ideas to strengthen representative democracy at both the national and EU level.

Steven Blockmans: Senior Research Fellow at the CEPS and Professor of EU External Relations Law and Governance at the University of Amsterdam|||Sophia Russack is a Researcher in the Institutions unit at CEPS. Besides her responsibilities at CEPS, Sophia Russack is currently conducting research for a PhD at Maastricht University. Her main research interests lay in the fields of EU institutional architecture and decision-making processes, with a particular focus on the European Commission. She publishes analytical reports and commentaries on topics such as institutional reform ideas, the European Parliament elections, the internal structure of the current Commission, as well as the concept of differentiated European integration. Together with Steven Blockmans she was co-rapporteur in the Task Force Regroup and Reform: Towards a More Responsive and Effective European Union chaired by Danuta Hübner, MEP (2017).