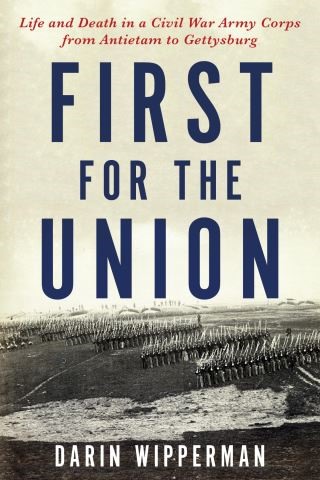 First for the Union

The Army of the Potomac’s First Corps was one of the best corps in the entire Union army. In September 1862, it was chosen to spearhead the Union attack at Antietam, fighting Stonewall Jackson’s men in the Cornfield and at the Dunker Church. In July 1863 at Gettysburg, its men were the first Union infantry to reach the battle, where they relieved the cavalry and fought off the Confederate onslaught all day before retreating to Cemetery Hill. Their valiant stand west of Gettysburg saved the Union from disaster that day but came at great cost (60 percent casualties). The corps was disbanded the following spring, having bled itself out of existence.

The First Corps’ leadership included two generals who would rise to command the Army of the Potomac—Joseph Hooker and George Meade—and a third who refused that command, John Reynolds, often considered the best commander in the East until his death at Gettysburg. The corps was made up heavily of men from New York and Pennsylvania (including the famous Bucktails), with a handful of New England regiments and the Midwesterners of the Iron Brigade, perhaps the Civil War’s most famous Union brigade.

Corps histories remain one of the last gaps in Civil War military history. Hundreds of regimental histories have been written since war’s end, many brigades have been covered, the armies have been explored . . . but corps remain relatively overlooked—not because they are an unimportant or unappealing subject, but because mastering the subject is so difficult, requiring knowledge of many commanders’ careers, dozens of constituent units, and many battles. Few are willing to tackle the subject. Lucky for us, Darin Wipperman has taken on the task and produced a monumental history of the Army of the Potomac’s First Corps, well written and deftly told, an exciting story in itself and, like all great unit histories, one that is representative of the many other corps in the Union army.