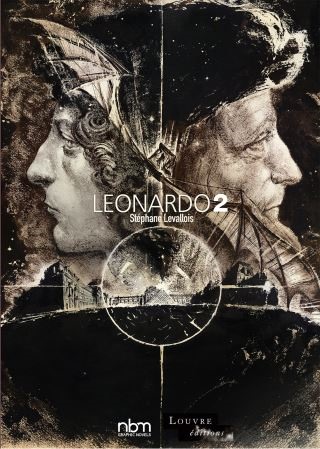 Planet Earth, engaged in an intergalactic conflict, entrusts its salvation to the clone of Leonardo da Vinci and to the rebirth of his genius. Author StÉphane Levallois has created the fantastic universes of many of the big Hollywood blockbusters (Alien, King Kong (Skull Island), Harry Potter and many others). In this tribute on the occasion of the massive retrospective of Leonardo da Vinci at the Louvre, he builds his story and composes his boards selecting a large number of drawings and paintings by the maestro to represent the characters, vessels or even the architectures in his story. The grand scale result is stupefying as Leonardo's everlasting visions are successfully projected into a stunning futuristic setting. A visual experience not to be missed in an oversized hardcover.

Stephane Levallois:
StÉphane Levallois was born in 1970 and lives in Paris. In 1988, he entered the Penninghen Graduate School of Graphic Art. Following his studies, Levallois did computer graphics training, and signed movie posters and illustrations. He joined the Cryo video game publisher as artistic director. At the same time, he became a storyboarder and produced designs for advertising and cinema, working for many directors and on such blockbuster movie franchises as Alien, Harry Potter, and King Kong. He designs for Stark, John Galiano, Jean Baptiste Mondino, and Hedi Slimane. He also does character studies for the Time Warner companies and Marvel Studios.