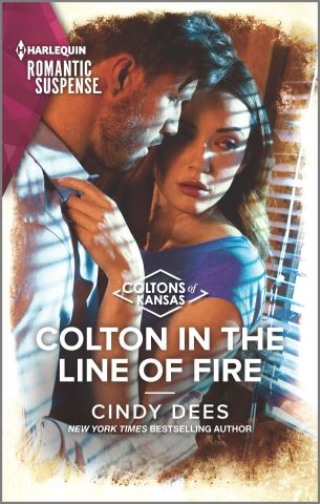 Colton in the Line of Fire

Thrown together to solve a crime…

Until she becomes the murderer’s prey.

Dedicated forensic scientist Yvette Colton is hell-bent on solving a cold case double murder. So is overbearing detective Reese Carpenter. When Yvette’s brutally attacked, Reese springs to her aid…and she notices that the lawman is as intoxicating as he is infuriating. Sparks between them ignite just as they try to outwit a desperate killer who wants to bring down the Colton dynasty—and especially Yvette.

The Coltons of Kansas

Book 6: Colton in the Line of Fire by Cindy Dees

Cindy Dees: Raised on a horse farm in Michigan, Cindy Dees dropped out of high school at 15 to attend the University of Michigan where she earned a B.A. in Russian and East European Studies. She became a U.S. Air Force Pilot, worked at the White House, and was a part-time spy during her military career. Her first novel was published in 2002, and she has published over forty more since then with HRS and HQN. She is a 5-time RITA finalist and 2-time RITA winner and has won numerous other awards.